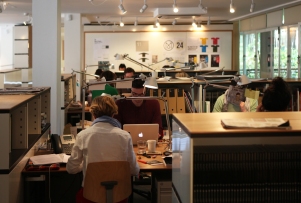 I’ve finished it. 9 weeks of true interning. All wrapped up.

I mean, I technically left the office for the final time on Friday 11th April at 18:39. Or whatever. But I still had some stuff to tie up: a couple of magazine pieces, which will be featured in the June issue, and some thank-yous to say. As of now, though, they’re dusted. And done. Done and dusted.

There haven’t really been any blog-worthy moments from the past two weeks. I mean, there was a rather funny story involving some glasses from Japan, but I seem to butcher the narrative the more times I tell it. And the story about me using my Tetris skills to expertly pack some items into a set of boxes seems, on reflection, slightly more lacklustre than in my head.

Actually, I did conduct my final Monocle radio interview – with London’s ‘first cold-press juice bar’, Roots & Bulbs, at their new store in Marylebone. The whole experience earned me a free £10 juice and a couple of health conscious twitter followers, so it has to rank as pretty important. Plus the husband and wife team that own the company were super nice. Smiles all round. Check it here (41 mins in):

But yeah, aside from that, the two weeks were relatively calm. Of course, the power of a final blog is that you can look back at the period as a whole.

I was so conscious at the start of this year (2014) that all of my internships had been handed to me. Yes, I have a good degree, and yes, it takes competence whilst on the job to have been offered the continued opportunities that came my way, but still – nothing was truly mine. I paid to go to Africa. I had family connections help me get to work at a newspaper and intern in Brussels. But Monocle was different. I decided that I wanted to work at Monocle. I tailored my application, without getting anyone else to have a quick glance at it. I went to the two interviews, and I put two months into the company.

So that’s been a great professional confidence boost.

I honestly can’t thank the people I worked with enough for consistently giving me opportunities. I think my voice was featured on almost every radio show – all four live shows, The Urbanist and The Menu (x2) – and I’ll have had 2, or maybe 3, pieces published in the magazine. And I know from having done the fact-checking for other writers that a super high quality pdf, replete with lovely photos, can be sent over to support my portfolio.

There are a number of other skills that I picked up / pushed further (politely chasing people on short notice for an interview, being the calm sponge that soaks up the nervousness of someone waiting for an interview, simply being clear and charming on the phone) – but my favourite has simply been to gain a love of the radio. Pre-Monocle, I’d worked for a bit at HeartFM, but I didn’t really appreciate the craft. Heart is perfect for listening to for 30 minutes in the car – it’s perky in the morning, and the songs are all sing-along – but if you listened to it all day you’d go insane. Nothing really changes. The DJs have a list of 12 songs that they play, and they sometimes run phone-in competitions.

With Monocle24, though, the producers put in a colossal amount of work. There are two meetings a day to discuss which news stories need to be covered. They run documentary series every week – last week centred around the art of translation, so had a discussion with, among others, the head of translating at the UN, and with the actor that played Spanish Buzz in Toy Story – and they send reporters into the field to cover slightly more slow-burning stories. Heck, I was one of them, with my Gatwick story. I’ve got to thank them (and I’m putting their deets on here so that any readers can check them out):

Danny Giacopelli (@danielgiaco) pretty much gave me free reign for organising the series on cross-border cultural exchanges, and was the first to ask if I wanted to go and do a radio interview. He was also pretty much chill at all times.

Aled John (@aledwdjohn) gave me my first lesson on producing radio packages, using a marantz, and ultimately allowed me to scale the shard to talk to a renowned architect. Plus he was also an Arsenal fan. Big props.

Tomos Lewis (@stopclock83) has to be included for shaking my hand after every single radio show that I helped on. You just don’t get chivalry like that anymore.

This is becoming a bit of an honour role. Well, whatever. Onwards:

Markus Hippi (@markushippi) – also known as the man with the most distinctive voice on radio. Taught me how to be cool under crazy pressure (like when a live guest drops out mere minutes before he’s supposed to be on air), and featured 2 (!) of my interviews on his show, ‘The Menu’. Cheers.

Daphnée Denis (@daphneedenis) – she’s great. Puts together a tight show, is driven without being alienating, and gets like 3 extra points for being French

Also, a couple of others:

David Spencer (@themediamentor), one of the newsreaders for the radio. Aside from being a top professional, he sometimes bought me coffee and was more than happy to talk Arsenal in a sport-averse atmosphere.

Fernando Pacheco (@feap) – possibly the warmest and most welcoming guy ever. Helped me settle, and allowed me to steal some of the books he got in for the book review segment on one of the shows.

Basically, it takes time, money, a strong intellectual vision and a great team to produce consistently great content. And there’s no doubt that this is exactly what’s on offer on Monocle24. I will, of course, strive to listen to it a few times a week from now. Those guys are simply awesome, and it’s borderline criminal that many people don’t know about it. Here’s the link http://monocle.com/radio/

I guess it’s only natural that I feel less connected to the magazine than the radio, given that 2/3 of my time was spent dealing with those supersonic airwaves. Again, though, the team of editors and writers are great. After all, it was the magazine that drew me to company as a whole.

On the day that I accepted Monocle, I turned down six months at a political consultancy firm. I’m glad to say that after two months, I’m clear that I made the right choice. I had a very enjoyable time, learned a lot, and got a first-hand taste of a career that I may very well pursue further.

2 thoughts on “Monocle, Week 9: A Retrospective”